Three Sisters - Which one are you?

Psychology of children has been studied for centuries.  And as I made these three quilts I began to call them the three sisters.  I have an explanation why each one has it's place in the family and a very loose grasp on the psychology of how childhood might relate to them.  Once you've read my post, I hope you will let me know which one of the sisters you are. 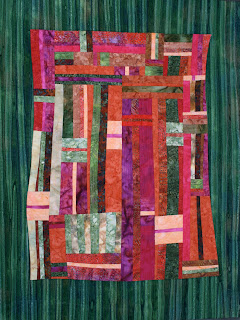 This quilt was in my last post and is what I am calling the oldest child.  She came first and required a lot of attention.  I spent quite a bit of time figuring her out and planning how she would be quilted and raised up into this final product.  She is also bigger than the other two sister quilts.  And even if she wasn't bigger than the other two, she would think she was just because of the time it took to conceive of her and to create her. 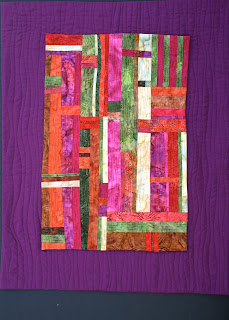 This is the second child.  She was brought up in much the same way as the oldest child.  However, the random strip piecing method had become more familiar and therefore she did not take as long to make.  Perhaps the middle sisters feels she did not get the attention she deserved, however she turned out just fine and has her own personality and vibe.  She will however always feel she did not get enough attention.  She is also slightly smaller than her older sister.  22" X 28" 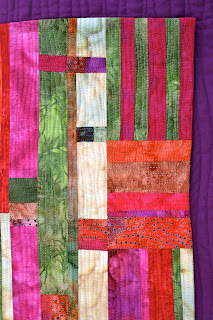 To help with this jealousy, I have added another picture of her close up.  This picture shows her details and stitching.  Hopefully she will feel like she has been given more attention now.  Her older sister does not care because she came first and apparently that is enough for the oldest child. 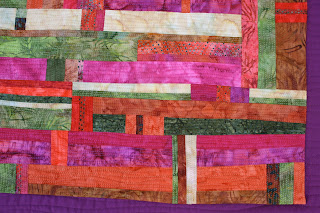 One more picture of the middle child should suffice and if she is not satisfied, then she will never be and there is nothing anyone can do about it. So there.

Finally, there is the baby sister.  She was created free from worry and with less concern for the final outcome.  She would take on her own personality and there was little I could do to change it, which I have learned from the first two sisters.  There were more experiments and mixed media brought into making her.  By now a more carefree attitude seems to dominate her creation.  Perhaps it is because the painstaking hours put into the first two sisters have exhausted me and I realize I just need to relax. 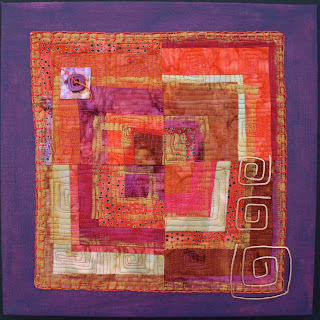 The baby has a much different aesthetic.  She is 12" X 12" and mounted on a canvas.  I used copper that I painted with alcohol ink and copper wire that I shaped and hammered.  I also make freezer paper stencils and made squares using both the positive and negative space and some gold fabric paint.  I hand stitched her edges, perhaps to make up for the painstaking hours that I did not spend on her.  (you know how there is only one picture of the baby of the family and when they are 20 you kind of feel bad about that) 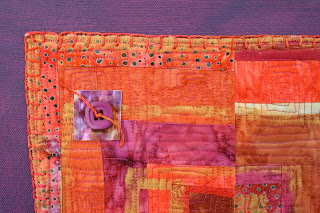 The button on the copper square came from my grandmother's stash that I recently acquired as she downsized her apartment.  The canvas started as hot pink, then purple and then a wash of metallic burgundy.  The iridescent sheen can be seen in person but, not so much in the photo.  The baby is spoiled - she got the bling, the button, the fancy wire, the gold paint and set on a canvas.  She knows she's spoiled but, due to that drastic reduction of photography time on her, she'll take the spoils happily. 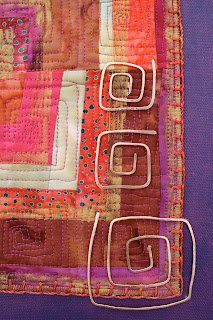 Copper wire in square spirals and hammered so they have a bit of texture add another metallic element to the piece.  Why not, she deserves it.

So there they are, the three sisters.  I would love to hear from any of you out there who are part of a family of three sibs.  Which one are you?  and how's my quilt psychology?  Thanks for checking it out and please leave a comment.
Posted by Claude Larson at 12:25 PM 6 comments: