More Gifts from the Sea

I liked making my last piece so much that I decided to expand it a bit and make a larger collage with the same color scheme.  I again painted a canvas with beige, silver and gold then over painted it with black and used a comb to scrape some lines to reveal the layers of paint below.  It also gives the piece movement. 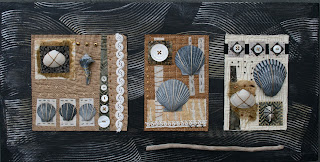 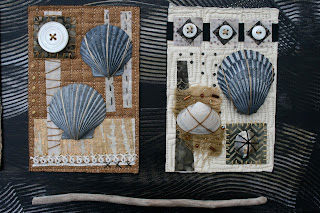 This close up shows the quilting, hand stitching and smaller details of the 4 X 6 pieces. 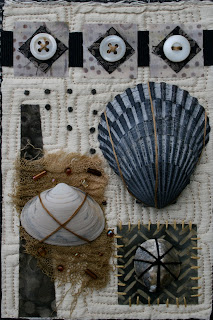 I collected so many black scallop shells that I was able to find five of them that I could stack to make a cool layered effect.  The cheesecloth is from my recent hand dyeing experiments. 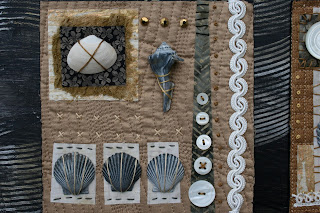 For those of you out there who are beach combers, I hope you decide to do something with all those shells you find.  I am very happy that I picked out these few and have them out in view each day.  AS the fall chill starts in they remind me of summer days on the beach.
Posted by Claude Larson at 2:29 PM 3 comments:

Back to the Beach

13 1/2" X 32"
The quilt is similar to the stick and stones piece in that there are three separate layers of quilted fabric that are then attached.  I once again used the earthy brown silk as the focal fabric and did some hand stitching. 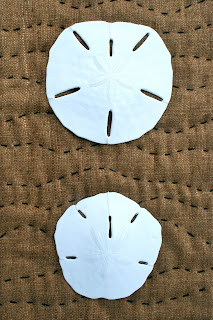 Here is a close up of the sand dollars, silk and hand stitching. 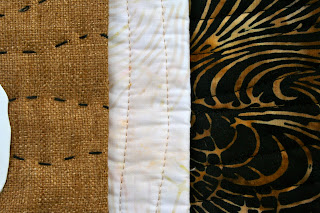 The three fabrics had a very cohesive feel to them.
The second art quilt is mounted on a canvas that has several layers of paint that were over painted with black and then scraped with a comb.  It is a collage of mixed media.  Although both use elements collected from the beach, they are very different in both composition and design. 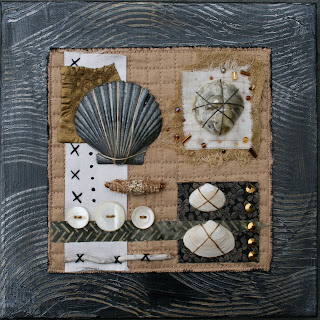 8" X 8" canvas         5 1/2" X 5 1/2" mixed media fiber art
This piece has a base of dupioni silk that I quilted with rayon thread.  It has several shells collected from the New Jersey shore where I vacationed right after Hurricane Irene left town.  I also have some drift wood, beads, ribbon, fabric bead, mother of pearl buttons and hand dyed cheese cloth mixed in there. 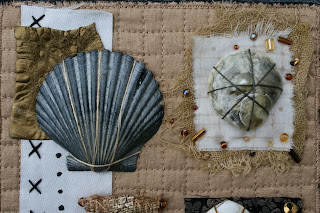 Here is a close up of the upper half. 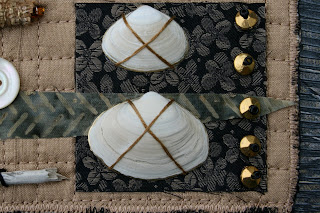 I love the way the texture of the silk, fabric and shells comes together.  This piece has hints of gold in the fabric and a certain luster that cannot be accurately shown with my photography skills.  As with all our work, it looks better in person.
Thank you for looking at my work and further indulging my desire for beach combing.  I am forever in the hunt for that perfect shell, pretty stone or tumbled beach glass.  For me, all of those things make a walk on the beach perfect.
Posted by Claude Larson at 4:41 PM 7 comments:

As promised, now that the county fair is over I am posting pictures of my mixed media mermaid, Marina Pearl.  She was made from a mannequin that was headed for a dumpster, fabric, matte medium, metallic paint, Shiva paintsticks, punchinella stencils, fibers, beads, a silver starfish and repurposed lightning rod wire that I got from a friend.   I'm sure I left off a few materials but,  you get the idea. 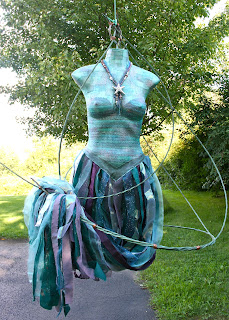 To photograph her I tied a rope at the top and hung her from the basketball hoop in the driveway. 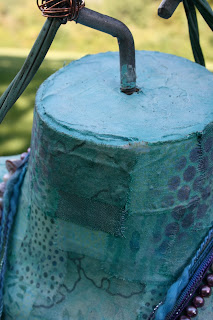 The top was just plain wood so I covered it with modeling paste and several different layers of paint until it blended with the body. 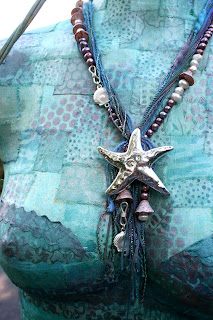 Her necklace was a variety of fibers from an Oliver Twist pack and pearl beads and shells.  I love the silver starfish focal bead. 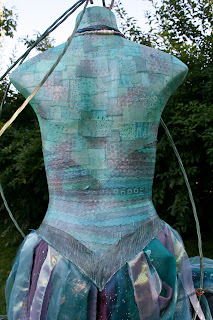 From the back she has the classic mermaid V-back that goes into her flowing skirt. 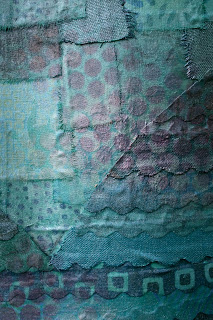 Here is a close up of her body.  The fabric was ripped into squares on the top and cut with a scallop blade rotary cutter on the bottom.  It was all attached with matte medium, overwashed with metallic aquamarine paint, stenciled with pearl white and purple metallic paints and given a protective coating.  It really gives her a nice texture. 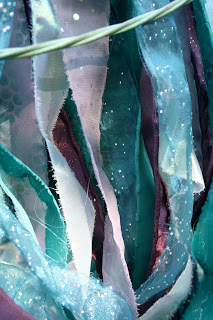 Her skirt is a collection of fabrics from the sale table (post Prom season) at Joann's.  I stenciled and painted some the fabrics but some were used as is.  They were ripped into strips and attached to her skirt.
Surrounding her is a wave made of lightning rod wire.  It is essentially steel wire that is copper coated.  So, it behaves like steel and has the patina of oxidized copper, a winning combination.
Feel free to leave a comment and thanks for visiting Marina Pearl.
Posted by Claude Larson at 9:46 AM 1 comment:

I'm back from an amazing trip to Chicago for my first ever art retreat.  It was a great week and I learned a lot.  Luckily I brought my camera along so I can remind myself of all the new techniques and materials that worked with.  And even better than that, I got to meet and learn from a lot of artists that I have admired from Quilting Arts and Cloth Paper Scissors DVDs and workshops.  Among them were Jane LaFazio... 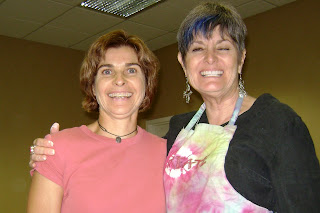 She is great because she refused to use fancy terms for anything and really makes you feel like your intuition is your best artists tool.
That evening, I had a class with her roommate, Helen Shafer Garcia whom I forgot to photograph but, as luck would have it, when I sat down at my table my table mate was none other than Kelli Perkins. 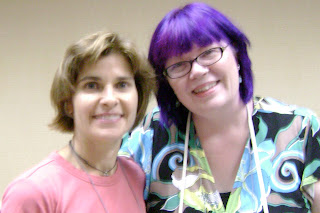 Apparently there was a memo about dyeing your hair a cool color that I did not receive, but no one held it against me.
The next day I had a class with my favorite mixed media artist, Beryl Taylor.  Her work is so stunning and detailed that it just draws me in.   She had several of her projects on the table and I took the opportunity to look at each one very thoughtfully and listen to each technique she described with eager attention. 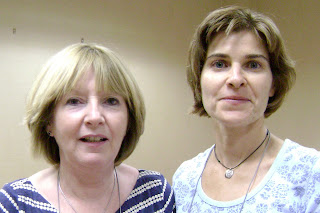 This is me grinning almost unable to contain myself at being in Beryl's company.
The following day I took a class with Rebekah Meier, who's book about 40+ ways to add surface design to various media is a wonderful publication.  I have pored over it many a time.  She was extremely prepared and helpful.  She shared her techniques, supplies and insight and we all came away with several pieces of very unique cloth. 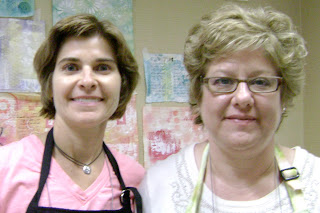 Rebekah is a Chicago native so I can only imaging how jammed her car was with all of the goodies she brought to class.
After dinner there was an Artists' Faire where the instructors and other mixed media vendors sold their work and various supplies.  I was lucky enough to meet Pokey Bolton, someone I admire for her vision of creating not one but two outstanding magazines that have opened up a world of possibilities to me.  She was extremely nice and as you can imagine, full of energy.  Her presence really amped up the atmosphere. 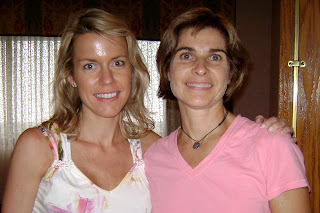 Well, while I was enjoying the fabulous Chicago weather (you don't hear that very often), my home state of New Jersey was bracing for the force of Hurricane Irene.  And she arrived with a vengeance.  In fact, I tried to leave Chicago early and go home to avoid being stuck in Chicago until the middle of next week.  Alas, all flights were cancelled well in advance of the storm and I was stranded.  But, as luck would have it so was Beryl Taylor.  So, we made a plan to go into Chicago together and visit a museum and do some other stuff.  It was a wonderful day and I got to spend part of it in the Chicago Museum of Contemporary Art with Beryl.  Truly inspirational, there are no adequate words.  We also took an Architecture Cruise of the city and walked part of the Magnificent Mile.  We had a stop at the Marilyn Monroe Statue before we headed back to the hotel.  And decided that in our stranded state, we NEEDED to have Ghiradelli ice cream for dinner, there was no debate. 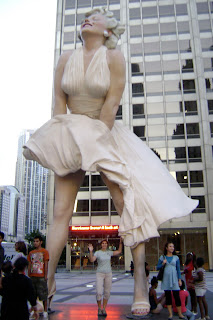 Here I am with Marilyn and if you look closely, you can see the Hurricane Irene news ticker going on above my head.  Beryl took this shot before we hopped in our cab and headed to the train station.
Just as I thought the Chicago trip was close to an end, our plane flights were again in jeopardy.  Beryl and I really wanted to get home so we decided to take a Greyhound bus from Chicago to Newark, New Jersey.  Through a series of events too numerous to mention, we ended up on a bus trip that would last 19 hours and made us feel like true travel warriors.  Or at least like we had been in a battle.  (Which we nearly were)
Sometimes strange things happen that are actually ways of making your wishes come true.  If there was ever an artist that I wanted to spend more time with, it would be Beryl Taylor.  And there I was, never mind the grubby bus terminals and uncomfortable sleeping situation.  I got to spend time with an artist who's work is truly inspiring and who's personality was easy going and full of humor.  If I had it to do over again, I certainly would.  And even if your trip to an art retreat doesn't end with a magical mystery tour, I highly recommend it as an inspirational boost.
Posted by Claude Larson at 11:58 AM 2 comments: